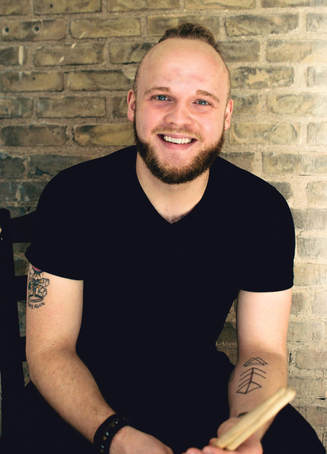 ABOUT MATTHEW
Matthew Tinjum was surrounded by music at an early age and started playing drums at the age of seven. Ever since then, he has been progressing; playing with artists such as Emmy-winning rock violinist Mark Wood (New York, NY), Americana-jazz-folk duo Tim and Myles Thompson (Nashville, TN),  touring vocal group The Diamonds (Reno, NV), and rock violinist Bridgid Bibbens (New York, NY). He has also performed in numerous musical pit orchestras, including with Act Up Theater for Spring Awakening at the Edinburgh Fringe Festival in Scotland, the largest performing arts festival in the world. Matthew recently completed his Bachelor of Music at Minnesota State University Moorhead where he played for the jazz combos, commercial ensemble, jazz ensemble, guitar ensemble, percussion ensemble, symphony orchestra and also spent plenty of time in the studio.  Most recently, Matthew can be heard playing drums and percussion for Conor Lee's jazz fusion album, Adapt; Jessica Vines' Ep, For a Night; and Michael Beatrez's folk album, You're All I Need.  Matthew tours the nation with the original country/rock group 32 Below, is a frequent sub drummer for Post-Traumatic Funk Syndrome, performs with groups such as The Funk Commission, the Conor Lee Quartet, The Paul Silbergliet Trio, Harmony Party (jazz fusion trio with Nik Gruber and Conor Lee), the Jeremy Brekke Band, Dempsey's Monday Night Big Band, and any other projects that come his way. Along with performing and perfecting his own craft, Matthew also has a passion for education. He has been teaching drum set and snare drum privately for five years and cannot be more excited to join the team at Amped School of Music!